Start shopping online now or call to place an order

Welcome to Our New Site!

The almond is botanically a stone fruit related to the cherry, the plum, and the peach. Almonds are mentioned as far back in history as the Bible. They were a prized ingredient in breads served to Egypt’s pharos. Their exact ancestry in unknown, but almonds are thought to have originated in China and Central Asia.

The almond tree was brought to California from Spain in the mid-1700’s by the Franciscan Padres. The moist, cool weather of the coastal missions, however, did not provide optimum growing conditions. It wasn’t until the following century that trees were successfully planted inland. By the 1870’s, research and cross-breeding had developed several of today’s prominent almond varieties. By the turn of the 20th century, the almond industry was firmly established in the Sacramento and San Joaquin areas of California’s great Central Valley.

Throughout history, almonds have maintained religious, ethnic and social significance. The Bible’s “Book of Numbers” tells the story of Aaron’s rod that blossomed and bore almonds, giving the almond the symbolism of divine approval.

The Romans showered newlyweds with almonds as a fertility charm. Today, Americans give guests at weddings a bag of sugared almonds, representing children, happiness, romance, good health and fortune. In Sweden, cinnamon-flavored rice pudding with an almond hidden inside is a Christmas custom. Find it, and good fortune is yours for a year. 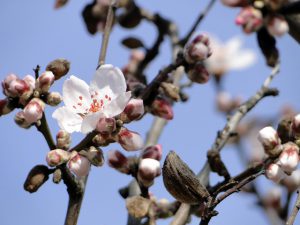 The earliest varieties of almonds were found in China carried by traders down the ancient silk road to Greece, Turkey, and the Middle East. Nestled between the Sierra Nevada mountains and the Pacific Coast Ranges is California’s fertile Central Valley, home to one of the oldest and most beautiful flowering fruit trees. Unlike other flowering fruit trees that bear edible fruit, this tree’s “pearl” is the delicious nut found inside the fruit, the almond.

The almond is one of the most versatile nuts in the world. We eat many varieties in many diverse forms. Almonds are delicious alone as a nutritious snack, and they are a prime ingredient in home kitchens and in food manufacturing. Almonds enhance virtually every food they grace with their distinctive taste and satisfying crunch.

California is the only place in North America where almonds are grown commercially. In the past 30 years, California’s almond yield has quadrupled. More than 450,000 acres in the lush San Joaquin and Sacramento valleys are under almond cultivation, stretching 400 miles between Bakersfield and Red Bluff, California.

Almonds are California’s largest tree nut crop in total dollar value and acreage. They rank as the seventh largest U.S. food export. Approximately 6,000 almond growers produce 100 percent of the commercial domestic supply and more than 70 percent of worldwide production. Over 90 nations import California almonds. Overseas, Germany is the largest market for almonds, consuming about 25 percent of the export crop, followed by Japan at about 12 percent. Other major importers include the Netherlands, France, the United Kingdom, Canada, India and Spain. The Pacific Rim nations are a rapidly growing market for California almonds.